skip to main | skip to sidebar

Ebay or not to Ebay?

I decided to throw this up on ebay, first timer. Probably asking too much but I like it, not sure I really want to get rid of it anyway. 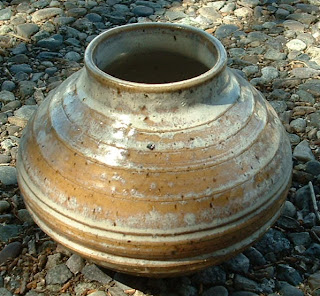 Making quite a bit of progress in the new class at the Grand Junction Art Center. They have a great studio and staff. Taking a class under Terry Shepard, he's a great potter and his knowledge is vast. Ask a question about anything and he's got an in depth response. I'm amazed at the amount of stuff he handles there and he's got the kiln's going pretty steadily so I should have some more bisque ware and glaze stuff soon.
Posted by J. Knez at 1:42 PM No comments:

Starting a new class tomorrow at the Clay Center. Looking forward to it, in the mean time I have been doing a bit of slab work at home. All these pieces need fired now. 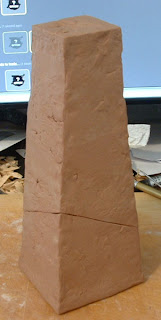 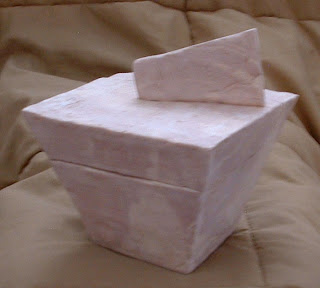 Can't wait to plant a cactus in this one. about 6 inches around. 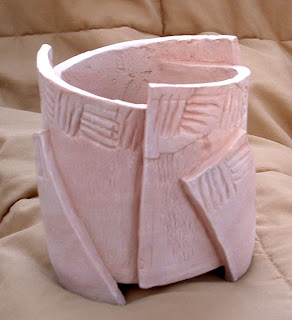 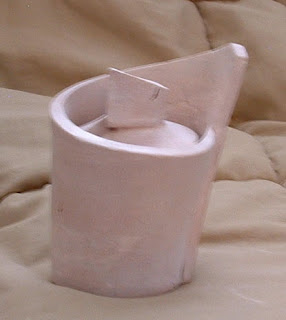 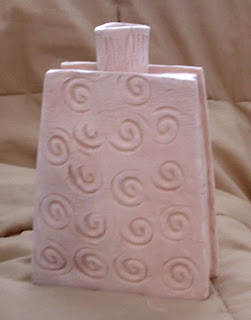 Let's see, some stuff I made in class...

Corporate Fertility Statue:
If Corporations are people my friend then who are their mothers?
Originally started as an idea for a political cartoon (pregnant lady burping smoke in her doctors face...)
Right at the end of class I decided to try and realize it in clay. I bit sloppy, but I wasn't even sure I was going to fire it, then someone else did... So I threw it in the soda kiln. 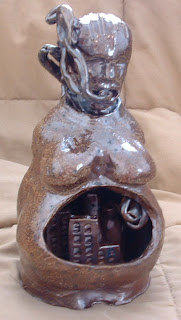 Faceted Vase:
My first 'tall' piece, it's about 9 inches but it was REALLY thick, So I started carving. After taking about half of it away it is still heavy. Used a nice green glaze that breaks well. 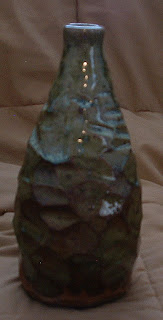 Spiral Vase:
Getting the throwing down, need to work on other details. Got a really nice soda fire on it though.  Used a chun glaze and it was mid kiln, top was really close to a shelf so I got a really smooth even carbon trap around the rim. Chalk that up to luck, experience also, helped me see how kiln placement could have an effect on the piece. 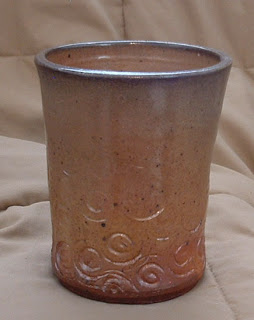 These went through the soda fire too. Raw claw, black and white slips. They were going to be square but left in the sun too long :(
Never had a chance to alter them. 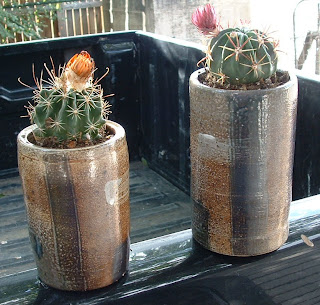 Kart, wheels and Tiki Mask I made for the Indie game Zero Gear